Thoughts on the PSM, stablecoins and the TUSD issue

Opening a bank account to store USD would be terrible for transparency, which is another advantage of Dai over other stablecoins. One you move assets off chain, there is no way to prove their existence in real time.
With regard to regulation, the goal should be enough geographical diversity to prevent one countries regulation from having a fatal impact and enough diversity between permissioned and permissionless assets so that we could remove permissioned ones if we had too (i realize that in the short-term this may not be possible but may be possible in the long term).

There is no direct way for regulators to shut down Dai. They could make it illegal for some individuals to use or interact with Dai, but we would really need to see what these regulations are before we could assess how to respond to them. I still don’t really understand what you’re going with this- do you really think that Dai should become a permissioned stablecoin similar to USDC- how would this allow Dai to retain any meaningful differentiation?

No. But I also want DAI to be a big player in the future. Either both are possible at the same time or we have to choose.

With regard to regulation, the goal should be enough geographical diversity to prevent one countries regulation from having a fatal impact

Good idea, this is something we need to track. But we also need to be clear that going against a big country regulation will decrease significantly our profitability.

I don’t really agree with the dichotomy here. Dai is user-generated and implicitly decentralized as no one can ever seize, freeze or destroy your Dai. This is a key component of Dai’s value proposition and I would never compromise on this front. The collateral that backs Dai is a different story - when considering collateral I firmly believe there is no such thing as actual decentralization, just diversification of risk profiles. Even ETH and BTC, while they may be technically decentralized, rely on liquid secondary markets for the purposes of being Dai collateral. These venues are beholden to regulators and sometimes even to the liquidity of centralized stablecoins, and they could be compromised at any time. Rather than being too focused on how decentralized the collateral portfolio is, I like to focus on its diversification - this is the only real metric that matters at the end of the day. In a dream world, a pro-rata slice of the Dai collateral pool would give the holder a perfect diversification of volatility and counterparty risk.

Rather than being too focused on how decentralized the collateral portfolio is, I like to focus on its diversification - this is the only real metric that matters at the end of the day. In a dream world, a pro-rata slice of the Dai collateral pool would give the holder a perfect diversification of volatility and counterparty risk.

It’s official. Let’s give TUSD the benefit of the doubt and keep it as a collateral. Spread the Risk.

This was not the takeaway

haha you guys are classic. Have to come back on occasion for the Maker comic relief.

I had been thinking about how USDC in the protocol could be a significant fall back if for some crazy reason DAI price started to fall. I was thinking about systemic risk events - the big ones that could just screw everything up pretty bad. Most people tend to ignore these now. I mean who wants to mess with crypto especially when the big banks and players want to sell it to the masses. Right?!

One thing that has been bugging me lately is a long ago concept of antifragility of these in crypto and the whole cyberpunk approach to societal change. I honestly don’t think antifragility it is possible since money has to land to transact for necessary goods and that is where the old system steps in with KYC/AML, taxes, transaction tracking etc… I remember the old days of Bitcoin where value and price growth was measured by how many merchants would take the BTC for ‘stuff’. Now I look at this space and wonder the same thing. Money is only as good as what you can use it for. I mean even if I get a zillion percent interest on something, and traders think it is worth something If I can’t spend the thing anywhere, for more than 5% of what I need, then what is the point.? Money is only as good as what I can trade it for, where.

I really think the biggest things missing in this space is the crypto bizaar where you literally can buy anything and what 10 years later I feel like I can buy less today with crypto than I could even 5 or 6 years ago. But hey there are crypto credit cards. lol

Everytime I hear about taxes, and KYC/AML I keep thinking of a UNODC 2011 report that pretty much highlighted how much of a FAIL AML has been indicating a disctintive need for a change. 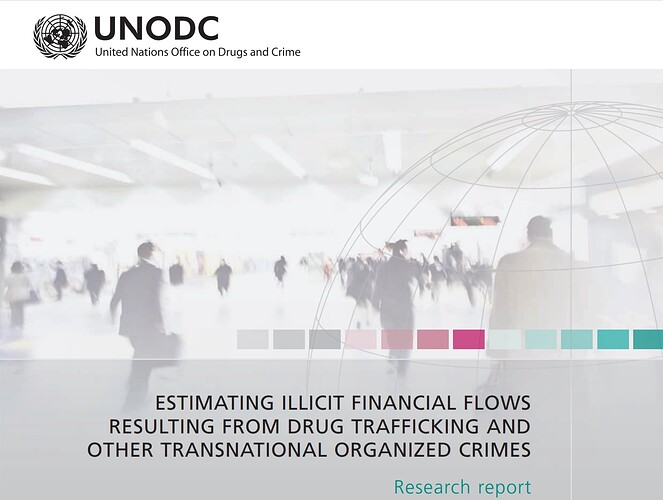 Many recent reports refer to the total amount of money laundering in the world, with wild and often unsupported estimates. For example, a September 2018 CD Howe research paper titled “Hidden Beneficial Ownership and Control: Canada as a Pawn in the...

I fully expect legislators in the west to grab a hold of these systems with both hands declaring ‘time for a change’ and it will be full control. I also have this vague feeling after seeing loan rates continue to decline and a descent into negative rates, for every bank, and every financial instrument, to basically implement negative rates. Imagine tomorrow you can only redeem your USDC for USD at .999, then .998 etc. etc. and the USD that lives in any account to be drained. At some point holding cash will be illegal and rebasing applied to digital versions of cash pretty much the new norm.

The trap we are falling into is to make money we are giving up on an idea. To so radically transform how we conceive of money, how we do business, in such a way as to transform society itself. It looks less and less likely that this can be done without significant battles in the new system with the old.

We keep coming back to the same theme over and over again. Highlighted to some extent in the classic Matrix Trilogy.

Two shorts “What is Control?”.

@g_dip Good catch, I didn’t thought about centralized exchanges. @MakerMan you are also right that I want to be able to pay with DAI at Starbucks.

I fully agree with the power of the DAI smart contract. But if most of our collateral value is in G7 jurisdictions and regulation can remove us from most distribution channels, what is the point?

I’m all in to defend our values of transparency and freedom inside the next financial system. Not on the fringe of it.

And the best way to avoid bad regulation is to preempt it or become too big to change.

Another path is to depeg from the dollar (let’s say worldwide CPI as defined in the whitepaper) and launch a new monetary standard. Then regulation is probably less an issue (but there are others).

I don’t care much about the path, but we should all be aligned on where we are going.

I would change the peg as you suggest way before enabling blacklists on dai. I think the peg to 1 USD will become an impediment to growth over time, and I think a peg to an index that provides for stable purchasing power (i.e inflation-adjusted) would be a good point of differentiation compared to other stablecoins like USDC- although this would make borrowing costs somewhat higher.

I mentioned this in other posts but the big problem with such “stablecoins” is that they are rarely used (there’s already whole crypto graveyard for them). I am happy to be corrected wrong if there are successful examples.

I agree that non $ stablecoin problem is that no one cares about them.

But we can decide to make a DAI-SDR (or whatever) Protocol on the side of DAI. Not sure we can succeed to make it mainstream but that would be a Plan B in case of stupid regulation. Better to start early.

To go back to the initial subject, I really feel defining “Tier 1 $-stablecoin” is important. The whole space would improve a lot if we can define rules to be Tier 1 and not Tier 1 (obviously only if DAI is Tier 1). Quite sure that if we are not at the table … we will not be Tier 1. Seriously, at the dawn of 2021 USDT is the main stablecoin, this is a joke.

We need to check what is the regulation on Eurodollars, I think it’s light (don’t see how the US can regulate Eurodollars in China or Russia). USDC and PAX can have all the US Federal insurance (and regulation) they want and we can still be the big player. But this can’t be the far west (sorry sUSD, ESD and co).