Since many of UNI LPs are different in their volatility profile versus other standard Maker collaterals, we decided to propose a different set of Liq 2.0 parameters that define auction activity.

We have three types of UNI LPs based on their volatility profile:

To understand the volatility profile of stablecoin/ETH or stablecoin/WBTC pairs, we first need to analyze the price behaviour of these tokens. In general they exhibit 50% less volatility when smaller drops occur, but when we have a drop of 50%, the impermanent loss increases and the token loses 29.3% of its value.

This means that the auction’s price curve slope should be about 2x flatter than the one implemented for other assets so far. In other words a 1% drop should occur in about 180 second instead of 90 seconds as was the default value for other vaults. Because the step length is going to be higher, we believe the curve should be smoother and therefore 0.5% drop is proposed (equals cut of 0.995).

Because of lower volatility we believe the buffer that defines the starting price (buffer applied to the last OSM) should also be about half of the default value previously selected at 30%. Hence buf of 1.15 is proposed.

There is however another angle to UNI LP auction risks. It is questionable how many keepers will have automated software from the start, where they will be able to use flash loans, unwrap LPs and sell them simultaneously. This is why we propose to a) implement a slope of the curve that is less than 50% of the slope used for other standard vault types and b) to extend the expected auction duration from the current standard of 40 minutes to about 60 minutes. This would lower the delayed bids and slower response risks that could occur initially at UNI LPs.

This also has implications for parameters that define auction reset. We propose cusp value of 0.6 which means that the auction can be reset when it reaches 69% of the OSM price (1.15 buf * 0.6 cusp). 31% drop in stable/volatile UNI LP pair equals about 50% in volatile asset drop.

Similar logic follows when choosing the tolerance value for the permissionless circuit breaker: since the tokens are about half less volatile we also believe the tolerance should be changed from current 0.5 to 0.7.

Pending auction throughput limit defined by ilk.hole is defined by UNI LP underlying asset liquidity. Most of the underlying assets in the pairs covered in this proposal are very liquid. Yet, due to specific risks surrounding UNI LP keeper participation as mentioned above, we propose a bit more conservative values on a level of 5m per vault type.

Below is the proposed set of parameters and the price curve. Underlying data can be found here 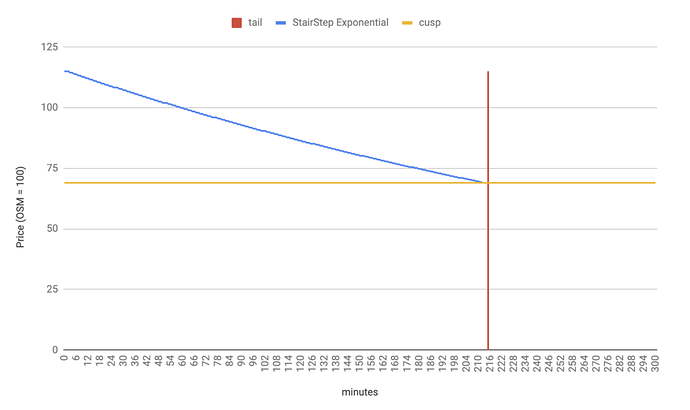 These pairs exhibit similar volatility patterns than most of the collaterals at MakerDAO. This is why we propose to use a similar auction price curve as was proposed for other “vanilla” type collateral at Maker. The only difference we recommend here is to have auction duration longer than 40 minutes set as default for other collaterals. Same as for Stablecoin/Volatile UNI LPs, we recommend auction duration to be closer to one hour for reasons and risks mentioned above. This is why the only difference recommended compared to other standard vault types is in the parameters step and tail, apart from the regular difference in ilk.hole. 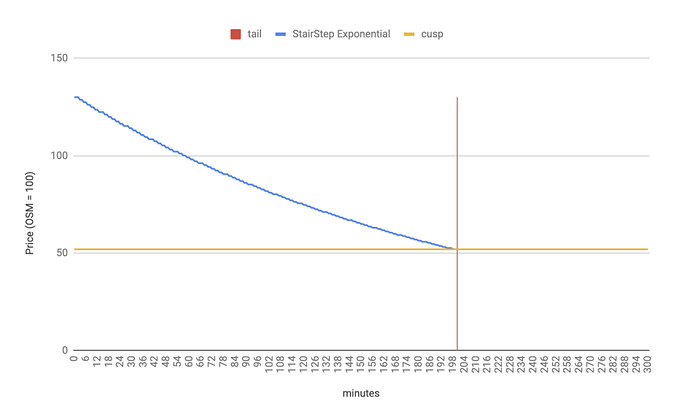 We won’t go into details about the current state of Tether and its publicly debatable questionable backing, but we know that USDT did trade with a 4% discount in November 2018. This is also one of the reasons liquidations are turned on for Tether at Maker.

There are two types of risks in regards to Tether related liquidations. One is related to oracle malfunction and the other to an actual price decrease of tether due to backing or regulatory related issues. We believe there is a similar if not a bigger chance something goes wrong with oracles rather than witnessing the scenario of Tether becoming unbacked. The potential “unbacked news” effect that would crash the price could be also short lived, where price would stabilize back higher.

With that in mind we believe that the auction price curve for an asset that has Tether exposure should be very conservative, meaning it would have a longer expected settlement time, flatter slope, low buffer, high floor price and low tolerance (high tolerance parameter value) for permissionless circuit breaker. The general idea behind such an auction price curve for USDT based collateral assets is to prefer the “wait and see” approach rather than performing aggressive liquidation. 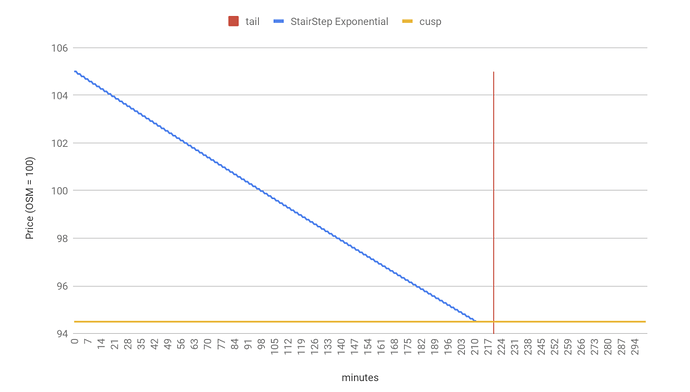