The DUX core unit is happy to share the soft-launch release of the voting delegation UI in the Governance Portal! As always we welcome your feedback or bug reports. 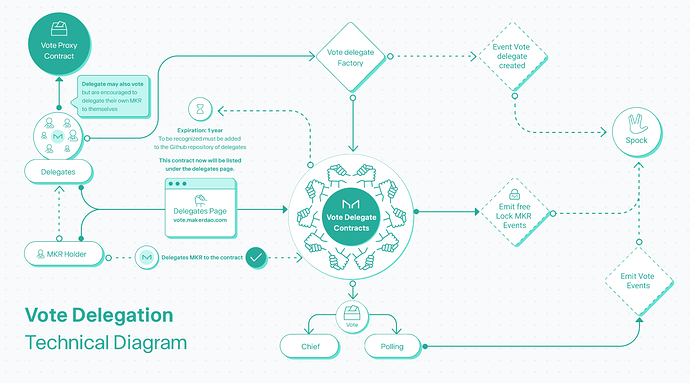 When you become a delegate, you can only operate as a delegate. You will not be able to vote with a vote proxy, for example. In the future, we will add capabilities for switching between your delegate and your normal account, but for now, this is limited in the UI. Of course, managing via the smart contract access is still possible.

In upcoming releases, the following features will be implemented:

Thanks to all of you for your hard work over the past months!

And congrats with the first release as the new DUX team!

The first one is the most challenging :).

I get lost for a couple of days in the forum, and I see this beauty displayed, how great, really leaves me super impressed, you are a tremendous team, keep it up.

Incredible work, thank you for putting so much effort into this.

Thanks DUX, it looks amazing!

Is it possible to have an additional feature?

Many MKR holders will never bother to read the Delegate Profiles or listen to interviews. They just want to delegate quickly and go on to do other things. This will especially be the case if delegation is ever incentivized.

To assist this group while preventing randomness I would like the following feature:
Neutral Delegate: The neutral delegate option is just like another delegate except that any MKR delegated is divided evenly amongst the other delegates. This prevents lazy MKR holders from making a mess of the delegation process by just randomly selecting someone from the list.

To assist this group while preventing randomness I would like the following feature:
Neutral Delegate: The neutral delegate option is just like another delegate except that any MKR delegated is divided evenly amongst the other delegates.

Neat idea Planet! Might make life easier for some folks. Let’s see what Gov Alpha thinks–or, if some in the community think arbitrariness can be risky (thinking out loud)

Is an interesting idea. Is something that should be designed carefully because there are some edge cases.

Probably the best idea is to delegate your MKR in 3 or 4 different delegates if you are not very sure about what to vote on.

If we had the governance layer on L2 it could be cheaper to do, but it is still pretty complicated. Probably people from the PE core unit can explain more about this.

Thanks for putting the idea on the table, we added it to our list of things to think about

The neutral delegate / or community vote, would not distinguish from recognized or shadow delegates. Because at smart contract level, all are the same.

The front end knows which are which though, and the front-end constructs the transaction. Feels like it could handle this?

The amount should be distributed proportionally to the actual amount of MKR that those delegates already have. MKR can not be distributed evenly among all delegates because anyone could exploit this by deploying many new delegate contracts.

If we can lock it to Recognised Delegates, this is not a problem.

Oh! I see the confusion now, you’re imagining there would be a neutral ‘forwarding / management’ contract. I was picturing this without a contract, and just the UI splitting some MKR between x delegates.

If the MKR was to be distributed among the delegates, that would mean paying a lot of transactions and that would be expensive.

Yeah, this was my concern as well. The more divisions, the higher the cost.

Feels like that is maybe as close to lazy-safe as we can get?

Thanks! This is very exciting! Well done!