An Endless Desert Ripples Before our Eyes 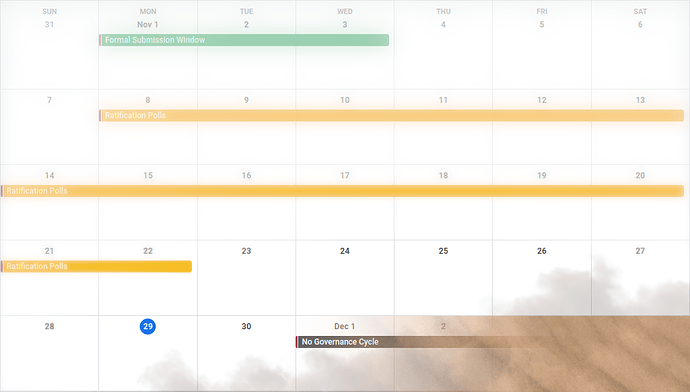 — RFC and FS Dates for reference and for existing proposals can be seen here.

As per MIP51c4: Calendar Exceptions, there will be no Monthly Governance Cycle in December, i.e., no Formal Submission Window and no Ratification Polls.

So the desert is not actually endless—its appearing so is no less an illusion than those waving, vague palms that hover just over the horizon when the heat is at its most scorching.

And is this a watery droplet that the sandy wind just carried onto my face?

Yes, it’s true that there will be no Governance Cycle in December and that the next Formal Submission Window will open on January 3rd—35 days from now. However, authors who want their proposals to enter January’s Governance Cycle must post them in the forum in nine days (on December 8) at the latest.

I know of these upcoming proposals:

Stuff to look forward to! Refreshing!

Also, there’s a number of proposals still in RFC that would benefit from your feedback. So please