Legal Disclaimer: This communication is provided for information purposes only. The views expressed here are those of the individual quoted or who present said materials and are not the views of Maker Foundation (“Maker”) or its affiliates. This communication has been prepared based upon information, including market prices, data and other information, from sources believed to be reliable, but Maker has not independently verified such information and makes no representations about the enduring accuracy of the information or its appropriateness for a given situation. This content is provided for informational purposes only, and should not be relied upon as legal, business, investment, or tax advice. You should consult your own advisers as to those matters. References to any digital assets and the use of finance-related terminology are for illustrative purposes only , and do not constitute any recommendation for any action or an offer to provide investment advisory services. This content is not directed at nor intended for use by the MakerDAO community (“MakerDAO”), and may not under any circumstances be relied upon when making a decision to purchase any other digital asset referenced herein. The digital assets referenced herein currently face an uncertain regulatory landscape in not only the United States but also in many foreign jurisdictions, including but not limited to the UK, European Union, Singapore, Korea, Japan and China. The legal and regulatory risks inherent in referenced digital assets are not the subject of this content . For guidance regarding the possibility of said risks, one should consult with his or her own appropriate legal and/or regulatory counsel. Charts and graphs provided within are for informational purposes solely and should not be relied upon when making any decision. The content speaks only as of the date indicated. Any projections, estimates, forecasts, targets, prospects, and/or opinions expressed in these materials are subject to change without notice and may differ or be contrary to opinions expressed by others.

Note that the Dust parameter for most vault types may be updated in a poll this week (per this signal request). If the vote fails, this vault type will be onboarded with 5,000 DAI Dust instead.

Sushiswap is a fork of Uniswap v2 with few slight changes such as introduction of governance token and its tokenomics. At the time - late August 2020, Uniswap did not have a governance token which could be rewarded for “liquidity mining” and incentivisation of protocol usage; this instance enabled opportunity for “vampire mining”, which aimed to shift current asset liquidity used in Uniswap to the Sushiswap - the event was seen as greatly successful.

Initial main developer known as Chef Nomi pulled a “rug pull” on the community where he withdrawn his SUSHI/ETH liquidity and cashing it out for ether; the situation was later resolved with the help of Sam Bankman-Fried who managed to return the protocol to the community, via establishing a multi-sig with well-known crypto community individuals as signers, Chef Nomi also returned the funds to the projects treasury.

Sushiswap as fork of Uniswap is using the same automated market maker (AMM) methodology with the x*y=k formula to quote prices. The model relies on market depth being constructed from the pooled liquidity and market agents making swaps with it, where price slippage is relevant to the swap order size and the size of the pooled liquidity. Liquidity providers known as LPs are earning trading fees and are subject to “liquidity mining” rewards from the protocol, but are exposed to “impermanent loss” which is loss which can occur after the pooled assets fluctuate in price relative to the value of asset if they would not be deployed into the pool at all. In general, the accrued fees in combination with liquidity rewards often completely offset the impermanent loss.

The main difference between the two protocols is that Sushiswap distributed accrued protocol revenue from 0.3% protocol trading fees between LPs (0.25%) and xSUSHI token holders (0.05%). xSUSHI is received after depositing SUSHI into a pool called SushiBar; a way to distribute a portion of accrued revenue to token holders. In addition Sushiswap is continuously rewarding LPs with a liquidity mining program, where in addition to collected trading fees, suppliers are rewarded with the protocol token SUSHI.

Sushiswap governance uses signal voting, where votes are in the form of SushiPowah, which is a voting metric and works as followed; each SUSHI in the SUSHI-ETH pool is worth 2 SushiPowah and each SUSHI held via xSUSHI is worth 1 SushiPowah. Votes are managed on snapshot.page, quorum of at least 5 million SushiPowah is required and the multisig signers mentioned previously implement the changes into the protocol.

While xSUSHI has limited direct trading volumes, it can be exchanged freely for underlying SUSHI tokens via the Sushibar staking contract. This means any SUSHI trading volumes and exchange integrations add to xSUSHI’s overall liquidity as well.

SUSHI has gained the most volume against assets such as USDT, WETH, and BTC. The exchanges that have accrued the most trading volume are CEXs such as: Binance, Huobi, Coinbase and FTX.

Snapshot of top trading volume for SUSHI pairs on 10 June, 2021:

With the exception of Sushiswap, other DEXs, such as Uniswap, have considerably lower volumes for SUSHI trading pairs. The reason why most SUSHI volume on DEXs happen on Sushiswap is due to high liquidity incentives associated with the SUSHI token on the Sushiswap platform. 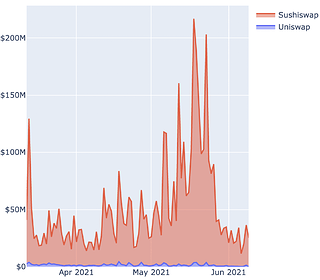 SUSHI tokens are distributed according to a declining issuance schedule. The rate of token emissions will steadily decline as token supply approaches the maximum cap of 250 million SUSHI. The current circulating supply is 172 million SUSHI.

The Sushiswap multisig receives 10% of all SUSHI tokens minted for liquidity incentives, and over time this has built up to a reserve of ~20 million SUSHI tokens. These can be used or sold at the discretion of governance to fund development or other priorities. The multisig also controls another ~30 million SUSHI that is being held in reserve for previously approved vesting of liquidity incentives. These are scheduled to be released to past liquidity providers over the next 5 months via a manual vesting mechanism.

The chart below shows the emissions schedule from launch out through year 4, when substantially all of the supply will have been distributed. 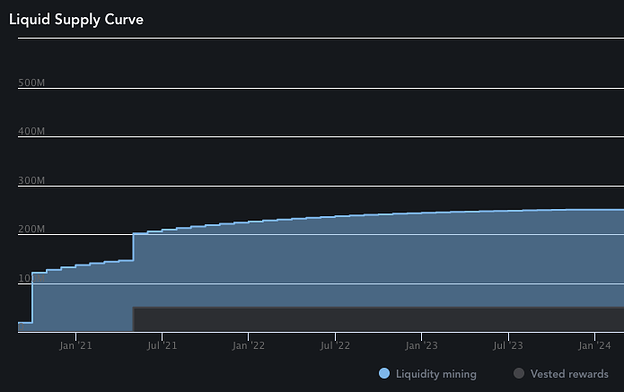 Most centralized exchange platforms offer trading in SUSHI tokens rather than xSUSHI, but we can consider these to be equivalent as SUSHI can be wrapped or unwrapped to xSUSHI on demand. Centralized exchanges offering SUSHI trading include Binance, Bitfinex, Huobi, Coinbase, Kraken, and Gemini plus many others.

SUSHI and xSUSHI tokens are offered on most decentralized exchanges as well, but due to high liquidity incentives the overwhelming majority of DEX liquidity is on Sushiswap itself.

xSUSHI is integrated with several other defi platforms, including lending and borrowing via Aave, Cream Finance and Unit Protocol. Aave in particular has seen high usage of xSUSHI, with over $150 million in xSUSHI deposited as collateral currently.

Source of data: Nansen and CoinGecko

As previously stated, the xSUSHI token has limited direct trading volumes. Approximately 18% of total circulating supply is being held on exchanges. Binance, SushiSwap, and Almeda OTC are the largest holders, where Binance holds circa 86% of all xSUSHI tokens on exchanges. However, since xSUSHI can be exchanged freely for underlying SUSHI via the Sushibar staking contract, SUSHI trading activity adds to xSUSHI’s overall liquidity.

Source of data: Nansen and CoinGecko

SUSHI has faced much larger and more frequent drawdowns than ETH over the past months since Sushiswap’s inception. Note that this period covers only since late August, and SUSHI’s performance during a more severe drawdown on the scale of March 12 2020 is still untested. 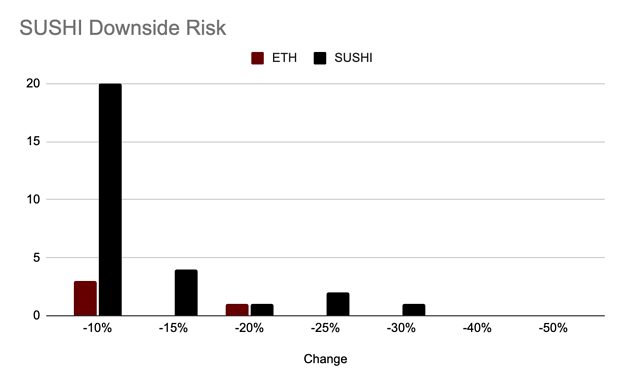 xSUSHI stakers receive earnings from the 0.05% protocol portion of swap fees. These earnings can act as a price support for xSUSHI token price, as trading volumes (and therefore xSUSHI earnings) will tend to increase during periods of high volatility when SUSHI token price could otherwise be falling. The chart below shows the total funds staked in xSUSHI versus Sushiswap trade volume and annualized staking yield. Generally it has trended between 5-10% APY, with a brief spike to ~30% during the May downturn. 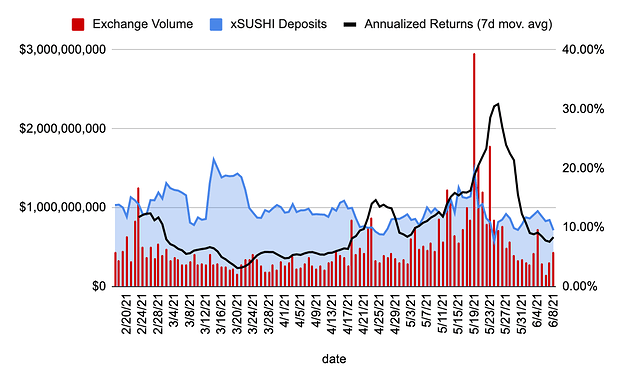 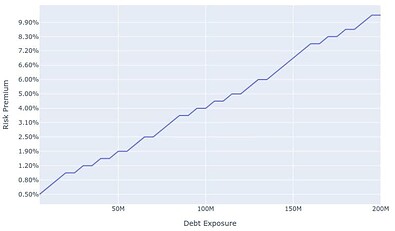 Note that the Dust parameter for most vault types may be updated in a poll this week (per this signal request). If the vote fails, this vault type will be onboarded with 5,000 DAI Dust instead.

About time Sushi was onboarded. This will definitely take off.